The South Australian Dairyfarmers’ Association or SADA is there to represent the interests of Dairy Farmers in the State. Particularly in recent years the dairy industry has been placed under significant strain because of a confluence of events, some domestic, others international.

SADA was established in 1936 and enjoys the some of the highest subscription rates from dairy farmers in the country, with 60% of the state’s dairy farmers being members of the organisation.

SADA seeks to attend to the protection of Dairy Farmer’s interests across a range of issues including responding to government expenditure of Dairy industry funds, biosecurity issues, infrastructure issues, transport matters and other challenges that come to the SADA Staff in their Adelaide Office.

Of concern in recent times has been the cost of doing business in South Australia with among the highest electricity prices in the country and an energy supply that has proven to be unreliable recently.

Because of the impact on dairy herds of power cuts SADA maintains a close relationship with the Network provider in SA to make certain that there is an effective response by the provider when powerlines are down.

SADA has also created its own research fund which is paid for with the SADA brand of milk, SADA Fresh. This fund goes to supporting the dairy industry and particularly members of SADA in improving and developing the industry in South Australia. SADA Fresh is now sold domestically in partnership with Coles and internationally into the Chinese market place. 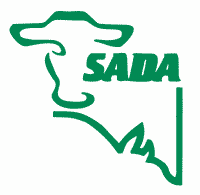