Join Bill and Marg Carroll in mid-October 2021 at Redbank to celebrate 101 years of their family Corriedale Stud.
We’ll make it a really good event honouring not only our Redbank stud and family history, but Corriedales for their splendid dual-purpose qualities. So wool and meat in various guises with spinners, weavers, knitters on deck, and butchers, good cooks and consumers. It should be fun.

In January 1920 at the age of 21, Alf Carroll set up Redbank Corriedale stud at Molong in central western NSW. Trading under M Carroll and Sons – Alf, his father Michael, and brothers Charles and Ray also ran Corriedales at Beulah stud, Trangie and Old Redbank, Molong.

Alf wrote in his marvelous memoirs, Gullible’s Travels – ‘The first sheep from the Stud were shown at Sydney Sheep Show in 1923. In 1924 we won the Ram Championship at Sydney Sheep Show.’ He commented that this success was a highlight that set the ball rolling with many championships and prizes, although he never set great store by that.

Recognised as a great sheep judge, he gained more satisfaction from consistently high sales of Redbank rams, including in 1959 the then Australian record price for a Corriedale ram at 1,600 guineas. Clients across Australia, and from every country breeding Corriedales: the Americas, India, Japan, China, South Africa, and Romania ensured the spread of Redbank blood. Only six outside rams have been introduced in that century of breeding.

Bill Carroll took over from his father in 1970 in the tradition of breeding top dual-purpose sheep, but focusing on commercial production. He and wife Marg are proud of their quality stud and flock rams, good-milking ewes and large lean lambs, which have kept ‘the wolf from the door’ for a further 50 years. Redbank Corriedales are recognized for lustrous, 25-27 micron wool that has fetched good returns for 100 years. 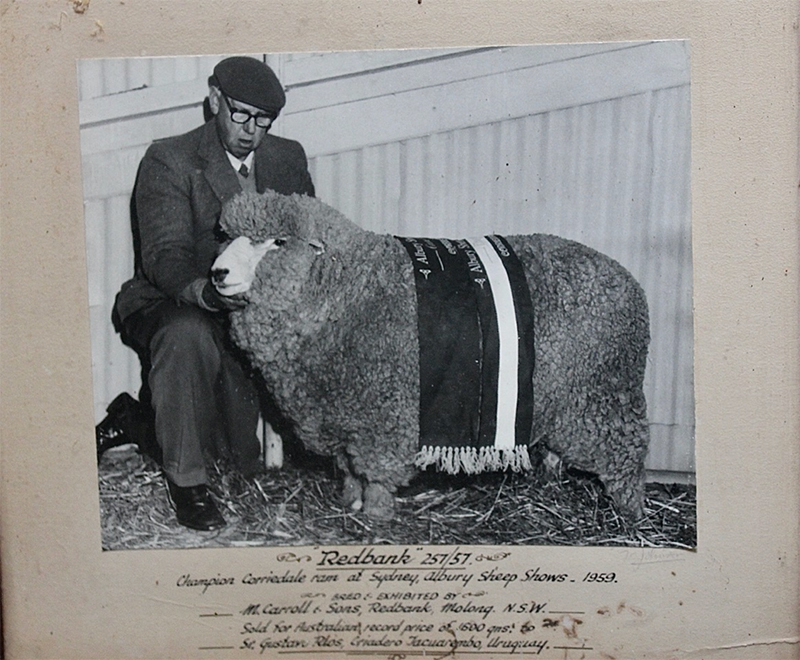